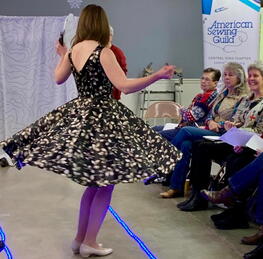 December 2019 - Annual Style Show
Members model garments and show their sewing skills on the runway. See over 40 entries, including a toddler, teen and a table.
Style show gallery 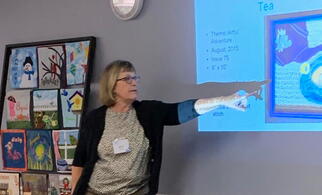 November 2019 - Art Quilts
Central Iowa member Sandi emphasizes the creative process rather than perfect sewing, as she designs and stitches art quilts, She finds inspiration from the people and places in her life and from her faith. Two of Sandi's quilts have been published in magazines and she has won first place in the State Fair fiber arts competition. 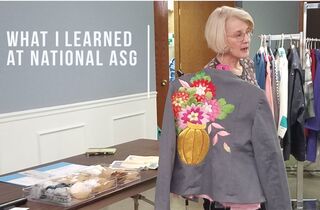 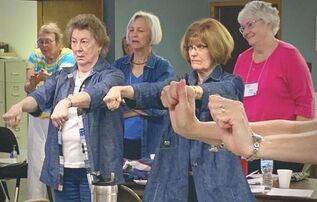 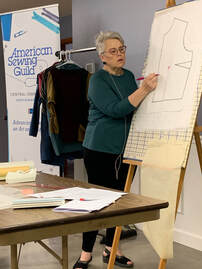 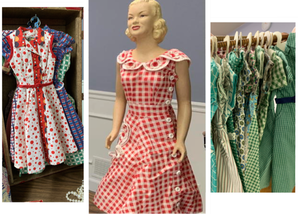 April 2019 - Princess Peggy
Marti Klatt presented Princess Peggy counter top mannequins. These dolls displayed salesman samples of houses dresses in the bargain basements of department stores in the 1930s to 1960s. Customers selected the style and color from the samples, paid $1.00, and ordered the dress by mail. The history of women's fashion and Midwestern textile manufacturing in the mid century came alive through Marti's engaging style, 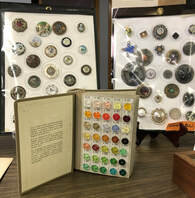 Chapter Mtg. Pictures
March 2019 - Buttons
What do mussels, copper, coconuts, snake skin, gold, pearls, and china all have in common?  They are materials of which buttons have been made.  The first button was a closure on a Roman cloak, likely secured by a loop.  The button hole was invented in the 13th century.  Buttons were initially ornamentation that indicated the wealth of their owner rather than a functional closure device.  The 1700-1900's were the golden age of the button with many being handcrafted works of art.  The invention the zipper in 1903 and the world wars devastated the button industry when many of the finer materials became unavailable, followed by the invention of plastic.  Iowa played an important role in the manufacturing of pearl buttons in the 1930-40s.   Slide Show of Chapter Mtg. Pictures
​Historical data and buttons provided by Linda Beatty of Button Seekers, the Des Moines Button Club. See Linda's  Passion for Buttons presentation here. 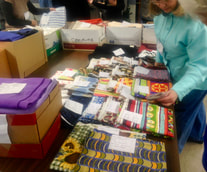 February 2019- Fabric Redistribution
Bolts, bins, bags, boxes and bundles of fabric, notions, sewing supplies and member-made handcrafted items exchanged hands at the Fabric Redistribution (aka a garage sale). Twenty percent of the sales will support future programs.
Pinterest as a Sewing Resource was presented by Diane.
See a Pinterset board Shibori Dyeing.